About the world in images

The Earth surface is shaped by an interplay of forces from the interior, leading to the formation of rocks, volcanoes, mountain ranges,lakes, oceans, and continents on the one hand, and forces from the exterior, attempting to level out the resulting disequilibria on the other hand. All these processes act over a broad range of scales in time and space, leading to a rich and diverse collection of landforms. Many types of landforms can be clearly related to the underlying processes whilst others are still subject of scientific dispute.

Volcanic and tectonic processes and landforms

Forces from the interior of the earth trigger the movement of the crustal plates and therefore also the evolution of broad-scale landforms such as mountain ranges, ocean trenches or island arcs. Whilst the formation of plutonic rocks in the deep remains unnoticed, endogeneous forces express themsevles in earthquakes and volcanic phenomena. The former may result in major ground displacements and associated damages. The latter include a variety of processes and landforms ranging from shield volcanoes characterized by fairly slow lava flows to stratovolcanoes with extremely powerful and destructive blasts of pyroclastic material.

During the cold periods of the Pleistocene, glaciers have completely reshaped the land surface of high-latidude areas and mid-latitude mountain systems, leaving behind systems of trough-shaped valleys with huge terminal moraines impounding lakes of considerable size. Today, extensive systems of glaciers and ice fields are largely confined to Arctic and Antarctic areas. Smaller glaciers are observed in many of the world's mountain systems. They are in a stage of retreat, leaving behind new glacial lakes as well as glacier forefields slowly being colonized by plants and animals.

If average temperature drops below a certain threshold, as it does in high-mountain areas and at high latitudes, the soil remains frozen all year round. This phenomenon, known as permafrost, results in specific landforms such as rock glaciers, pingos, palsas, solifluction lobes or stone poygons. In contrast, tropical high-mountain areas experience freezing and thawing every day, leading to the formation of ice needles and patterned ground. 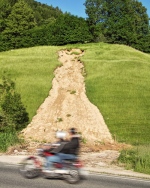 The more pronounced the relief of an area, the higher the energy available for gravitational mass movements (often referred to as landslides). However, landslides in clayey material are often observed at moderate slopes. Mass movements may occur as falls, slides or flows (large flows are sometimes referred to as avalanches). Their scale ranges from toppling of small rocks to the displacement of entire mountain faces. Velocities may reach tens of metres per second, but may also remain at millimetres per year. Most mass movements are triggered or accelerated by earthquakes, heavy or persistent rainfall, or undercutting of slopes. Mass movement deposits may impound lakes of considerable size which are often susceptible to sudden drainage. The deposits of many large prehistoric mass movements are not usable for agriculture and therefore host rare ore endangered species and ecosystems.

Streams and rivers have enough power to erode sediment and even bedrock. In general, such processes dominate the upper section of catchments. Farther downstream, where the river already carries a heavy load of sediment at a reduced slope, the eroded material is deposited and large floodplains may develop. This sediment budget reacts sensitive to changes in the flow regime, so that valley sections may experience alternating periods of erosion and deposition. This often results in systems of river terraces. Waterfalls are observed where rivers encounter abrupt cliffs, or where they have formed such cliffs by retrogressive erosion.

Limestone is highly susceptible to solution by carbonic and organic acids supplied by rainwater and vegetation. At geologic timescales, extensive systems of caves may therefore develop in limestone bodies, resulting in a lack of surface runoff. Apart from the presence of caves, surficial features such as rills (karren), sinkholes (dolines) and large-scale depressions (poljes) are indicators for karst processes. Karst landforms are not only observed in limestone, but also in other types of soluble rocks such as gypsum.

Strong winds may detach and transport large quantities of clay, silt even sand. During the cold periods of the Pleistocene, large deposits of loess have developed from wind-transported sediments. Particularly in deserts, without protective vegetation cover, wind can blow out all the fine material from some areas, which is thed deposited in others, sometimes evolving into extensive and complex dune systems. Within longer time periods, dunes may consolidate to remarkable graded sandstones.

Waves exert a continuous force onto the coastlines of the world. Exposed ledges are particularly susceptible to erosion. Part of the detached material, along with sediment from other sources, is deposited in protected bays, forming beaches of sand or gravel there. On the long term, coast lines are straightened by this interplay of processes. But the evolution of a coast also reacts sensitive to relative sea level changes. Particular geosystems are observed in the tidal zone and near the mounths of large rivers. Offshore, corals build impressive reefs in shallow tropical waters which are however, endangered by climate change and direct anthropogenic disturbance.